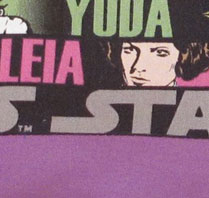 All my kids love Star Wars, but especially my daughter. One day she came home telling me that the boys at school let her play Star Wars with them, but they said she could “only be the princess”. Hmmmm. I was not impressed.

Of course I had to explain that Princess Leia is not “just” a princess. She is a leader in the rebellion (which means she gets to tell everyone else what to do), an important diplomat and politician, a spy, and a princess with magic powers. Most of the other characters don’t even have real jobs, unless you count smuggler and rebel as jobs. Princess Leia is pretty kickass, if you ask me.

So when I let my daughter pick her own fabric for a back-to-school pencil case, Star Wars it was!

Of course the problem with Star Wars isn’t just the kids at school, it’s also whichever marketing executive is in charge of licensing their merchandise, and who isn’t taking girls into consideration.

The fabric I used is Star Wars Character Names in Multi from the Star Wars II collection by Lucasfilm Ltd. and TM for Camelot Cottons. It’s official licensed fabric and has the names of eight characters on it. How many are women? Just one. (Though I suppose the ewok could go either way.) I picked this up at my local chain store, but you can get it online and there are a few different prints.

At least Princess Leia was on the fabric. This summer we visited the Star Wars Identities exhibit at the Canada Aviation and Space Museum in Ottawa. It was lots of fun. If you get a chance you should definitely go. And of course there were tons of toys for sale, since Star Wars and merchandising go hand in hand – but no female characters. There was only a bobblehead Princess Leia, (which broke on the car ride home) but that was it. Playskool makes a cute set of figurines that were for sale and that are way more age appropriate, but they make no women Star Wars characters at all.

It’s definitely something my daughter notices. She likes Cars (the movie), Planes, Star Wars, but when we go to the toy store there’s nothing for her, despite the fact that all those movies have smart, interesting female characters. But then those characters aren’t made into toys, and if they are, they are extremely hard to find. I suppose some marketing exec would argue that the female characters don’t sell, but that is especially true when you don’t make any.

So I was pretty exited to be able to make my own gear for her that was clearly for girls, and had her favourite character on it.

I used bright green fabric for the lining and solid purple to match the print for the exterior. Kid No 1 helped choose the colours. I wanted it to be clearly made for a girl, but not too girly. You really shouldn’t have to choose between solid pink 24/7 and “no girls allowed”.

I used the Perfect Zip Bag pattern by Elizabeth Hartman of Oh Fransson! I’ve made this pattern before, but I haven’t blogged it. The pattern can be used to make three different styles of bag, all fully lined, in a variety of sizes and with different straps and zipper pulls. I made view A in the larger size with a wrist strap and inside pocket.

It’s a great pattern. It’s extremely well thought out and the instructions are exceptionally clear and well written. And it makes a really professional bag that looks finished on the inside and outside.

I know there  are lots of free tutorials for zip bags online, but this pattern is definitely worth buying.

There is also an online tutorial on how to make the zip bags using quilted patchwork panels. I’ve used that technique for a larger bag using the Perfect Quilted Totes pattern (also not blogged) and the results were really nice.

I used flannel for interlining. I used canvas last time, which makes a crisper, stiffer bag, but for a child I thought a softer bag would be better.

Results: Great. I would strongly recommend this pattern and would make it again.

Just to be clear: The Star Wars name is trademarked by Lucasfilm Ltd. and used by the fabric manufacturer under licence. The zip bag shown here is not an official licensed product and is not available for sale. But you can always buy some fabric and make your own!

4 thoughts on “Princess Leia Goes Back to School”

Shannon is a Canadian sewing, quilting and stitching blogger living in Montreal. Also mother of four.